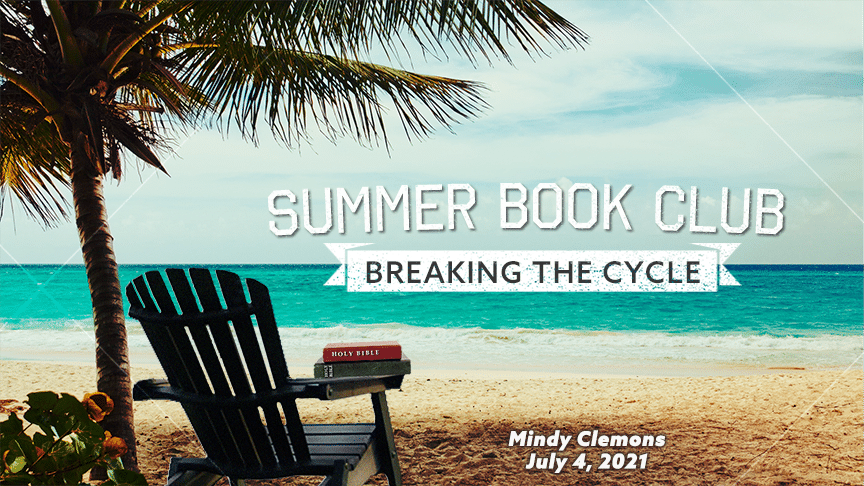 Freedom. It’s a wonderful word. A powerful concept. Something we celebrate.

Sometimes we say, “Freedom is not free.” What does that mean? Freedom is fought for, earned in battle, maintained at a cost. We celebrate freedom. We work together to keep freedom and live in peace.

What is the opposite of freedom? Being trapped? Enslaved? Stuck? In prison? Have you ever known someone who was stuck? Trapped in a pattern of behavior? Maybe enslaved to a behavior that was destructive? Maybe it’s someone in your family, or a friend, or even you? Struggling to find freedom can be so frustrating. It feels hopeless.

Well, you are not alone. The nation of Israel got stuck in a destructive behavior cycle too. Judges chapter 2 describes it:

And the people served the Lord all the days of Joshua, and all the days of the elders who outlived Joshua, who had seen all the great work that the Lord had done for Israel. And Joshua the son of Nun, the servant of the Lord, died at the age of 110 years…  And there arose another generation after them who did not know the Lord or the work that he had done for Israel. And the people of Israel did what was evil in the sight of the Lord and served the Baals. And they abandoned the Lord, the God of their fathers, who had brought them out of the land of Egypt. They went after other gods, from among the gods of the peoples who were around them and bowed down to them. And they provoked the Lord to anger.  (Judges 2:7, 10-13 ESV)

What is happening here?!

We read the book of Joshua last month to start our Summer Book Club series. In Joshua the nation of Israel was strong. They had a strong leader. They followed God in obedience and worshipped Him alone. And God gave them great success. The book of Joshua recounts mostly stories of victory, stories like Jericho and the day the sun stood still. There are long lists of battles won, and kings defeated. Under the inspired leadership of Joshua, the people of Israel marched into the land God had promised to give them and found victory everywhere they went. It was a great success story.

But now what? Joshua is dead. And the generation that came after him does not know God. They don’t care a whole lot for God’s instructions either. Why? Maybe they were shrugging their shoulders, asking “Did God really say…?” Maybe they were saying, “I know we’re not supposed to but it’s just a small thing, it cannot be that important…” And then they began to act like everyone else around them.

Maybe you know the saying, “Bad company corrupts good character.” The text says that the people “did evil in the sight of the Lord.” As you read through Judges you will often see the phrase, “Everyone did what was right in their own eyes.” In other words, they began to compromise. They worshipped other gods (Baal, Ashtaroth). And they didn’t just worship other gods. The text says they “went after” other gods. They chased them, pursued them, bowed down in honor to them, served them. They “abandoned” the Lord. How quick they were to forget!

God had warned them what would happen if they persisted in rebellion.

So the anger of the Lord was kindled against Israel, and he gave them over to plunderers, who plundered them. And he sold them into the hand of their surrounding enemies, so that they could no longer withstand their enemies. Whenever they marched out, the hand of the Lord was against them for harm, as the Lord had warned, and as the Lord had sworn to them. And they were in terrible distress. (Judges 2:14-15 ESV)

What was God’s response to their apathy, compromise, disobedience and rebellion? God was angry, justly angry. He sold them into the hands of their enemies, they lost battles and territory. They were weakened, lost their freedom, and were enslaved. And they were in “terrible distress.” This is not a good story.

Then the Lord raised up judges, who saved them out of the hand of those who plundered them. (Judges 2:16 ESV)

In their distress, when they called out to God, He heard them. He raised up a Deliverer for them. These were not “judges” like we think of today, but instead they were more like military leaders. We will meet some very interesting characters in the Book of Judges. They’re not always role models or heroes, but they are quite interesting.

As one of my friends said, “If this was a reality tv show, I would totally watch it!” It would probably be rated R.

God raises up a deliverer to save them. They would have peace and freedom again, for a decade or two, until they forgot again, and persisted in disobedience, and then more distress. Maybe you know this saying from George Santayana: “Those who cannot remember the past are condemned to repeat it.”

This is what happens in the book of Judges (the book of deliverers), over a period of 350 years:

It is an endless cycle of repeated failures, an ever downward spiral of defeat and delivery that just keeps getting worse. Why does the Bible even contain such stories of dysfunctional characters?

The book of Judges was written as a warning to us. A warning about compromise and disobedience.

What started with apathy and compromise and chasing the wrong things (the wrong gods), became a cycle of rebellion and failure, a loss of freedom, defeat, and finally self-destruction. The end of Judges is very shocking.

Judges is a sad story. How in the world did this happen?! Israel did not wake up one day and say “Hey, let’s be slaves again!” No one ever thinks – I would love to live in a place of defeat and distress. No, it’s actually a “Slow Fade.” These lyrics from a song by the popular band Casting Crowns illustrates this perfectly:

Does this remind you of patterns in your own life? Or patterns in the life of someone you know? All of us struggle with sin patterns like this.

We typically think of issues like alcohol, drug use, or pornography and sexual habits. But it can also be patterns of anger, anxiety, complaining or destructive language, bitterness (that one person you just love to hate), lying, impatience, spending money recklessly or gambling, oppressive guilt. It can be any thought cycle, or behavior pattern, that is destructive for you.

How does being in this cycle make us feel? Defeated? Hopeless? Frustrated? Ashamed? Regretful?

Is there hope? Is it possible to walk in freedom?

YES, there is hope.

YES, it is possible to walk in freedom.

Let’s look at two more ideas from the text that illustrate this hope:

1. WHAT GOD HAS DONE

The book of Judges is not really about the judges. It is a book that reveals to us the character of God. God is the only true hero in Judges. A God of mercy and patience and power. A God who loves even the most dysfunctional among us.
A God who wants us to walk in freedom.

Pay attention to the underlined phrases in this verse and what they tell us about God’s character:

Whenever the Lord raised up judges for them, the Lord was with the judge, and he saved them from the hand of their enemies all the days of the judge. For the Lord was moved to pity by their groaning because of those who afflicted and oppressed them. (Judges 2:18 ESV)

God heard their groans, their cries, and had compassion on them. He showed them mercy. He raised up a deliverer for THEM. He intervened.

This is the character of our God. He also was incredibly patient with them, time and time again. He is the God who gives everyone many, many opportunities. He desires that His people live in freedom.

If we find ourselves stuck in a cycle like this, remember the character of God. He is patient, full of compassion.

The Lord, the Lord, the compassionate and gracious God, slow to anger, abounding in love and faithfulness, maintaining love to thousands, and forgiving wickedness, rebellion and sin. Yet he does not leave the guilty unpunished… (Exodus 34:6-7 NIV)

He welcomes the prodigal home, again and again.

Next, let’s consider what we know about the work of Christ. We know from elsewhere in scripture that in the death and resurrection of Jesus, the power of sin over us is broken.

Jesus said, “God has sent me to proclaim freedom for the prisoners, and recovery of sight to the blind, to release the oppressed…” (Luke 4:18 NIV)

Thanks be to God, though you used to be slaves to sin… You have been set free from sin and have become slaves to righteousness. (Romans 6:17-18 NIV)

Through Jesus the cycle can be broken. We do not have to live in slavery to sin.
We can walk in freedom. The prison doors have been opened.

His divine power has given us everything we need for a godly life… He has given us his very great and precious promises, so that through them you may participate in the divine nature, having escaped the corruption in the world caused by evil desires. (2 Peter 1:3-4 NIV)

God has given us everything we need! If you feel trapped in a cycle of sin, know that the prison door has been opened by the work of Christ. We have hope because of God’s great mercy, because the power of sin over us is broken, and because the Holy Spirit helps us to walk in freedom. We learn in Judges of the depth of God’s love and mercy and patience, continually offered to people who do not deserve or appreciate it.

The second thing we must learn from the text in Judges 2 is that we have to do our part.

God has done His part. Now we have to do our part.

But whenever the judge died, they turned back and were more corrupt than their fathers, going after other gods, serving them and bowing down to them. They did not abandon any of their practices or their stubborn ways. (Judges 2:19 ESV)

They did NOT abandon any of their practices or stubborn ways. He saved them… and they went right back to their old ways! They didn’t do anything differently. They did not learn from their mistakes. They kept on in rebellion, making things complicated, sabotaging their own lives.

The door to our prison cell is open. We must choose to walk in freedom.

Therefore, since we are surrounded by so great a cloud of witnesses, let us also lay aside every weight, and sin which so easily entangles, and let us run with endurance the race that is set before us, looking to Jesus… In your struggle against sin, you have not yet resisted to the point of shedding your blood. (Hebrews 12:1,4 NIV)

How do we break the cycle?

Here are some practical steps for walking in freedom:

1. Identify what is going on and ask for help
2. Have a fighting plan
3. Learn how to fight
4. Spend time with other warriors
5. Unite with others and deal sin the death blow
6. Use whatever you have to win

The book of Judges was written for two purposes: 1 – As a warning to us, to convict us to be wary of compromise and the downward spiral of disobedience; 2 – As a reminder to us of the character of God, His mercy and grace and His ability to save us.

God wants us to walk in freedom. With His help we can break the sin cycles in our lives. In the words of Joshua – Be strong and courageous!