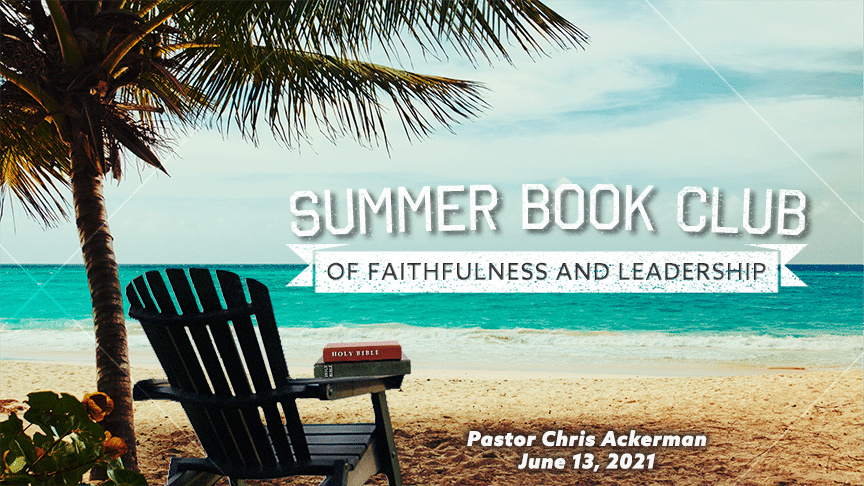 Last week in the introduction to our new sermon series Pastor Terry took us through the first five chapters in the book of Joshua. This week we’re focusing on chapters 6 through 10. Through these chapters we see some very dramatic victories.

As we look at these passages today, I want us to come away understanding the connection between faithfulness and godly leadership. Let’s start by talking about the leadership skills of Joshua.

Put yourself in Joshua’s shoes for just a moment and imagine that you show up to your staff meeting, a.k.a. prayer time with God, and God says, “Listen here’s what I want you to do this week.”

“… I have given you Jericho, its king, and all its strong warriors. You and your fighting men should march around the town once a day for six days. Seven priests will walk ahead of the Ark, each carrying a ram’s horn. On the seventh day you are to march around the town seven times, with the priests blowing the horns. When you hear the priests give one long blast on the rams’ horns, have all the people shout as loud as they can. Then the walls of the town will collapse, and the people can charge straight into the town.” (Joshua 6:2–5 NLT)

Then imagine the courage it takes to say:

On the day the Lord gave the Israelites victory over the Amorites, Joshua prayed to the Lord in front of all the people of Israel. He said, “Let the sun stand still over Gibeon, and the moon over the valley of Aijalon.” So the sun stood still and the moon stayed in place until the nation of Israel had defeated its enemies. (Joshua 10:12–13 NLT)

And Joshua son of Nun and Caleb son of Jephunneh, who were among those who had spied out the land, tore their clothes and said to all the congregation of the Israelites, “The land that we went through as spies is an exceedingly good land. If the Lord is pleased with us, he will bring us into this land and give it to us, a land that flows with milk and honey. Only, do not rebel against the Lord; and do not fear the people of the land, for they are no more than bread for us; their protection is removed from them, and the Lord is with us; do not fear them.” (Numbers 14:6–9 NRSV)

The Lord’s anger was kindled on that day and he swore, saying, ‘Surely none of the people who came up out of Egypt, from twenty years old and upward, shall see the land that I swore to give to Abraham, to Isaac, and to Jacob, because they have not unreservedly followed me — none except Caleb son of Jephunneh the Kenizzite and Joshua son of Nun, for they have unreservedly followed the Lord.’ (Numbers 32:10–12)

What does it look like to unreservedly follow the Lord and why was Joshua able to do it?

Friends, I believe wholeheartedly that God rewards our faithfulness, and he does it with an abundance of Grace. He is an extravagant giver when it comes to his children.

How many of you reading this today are grandparents? If so, then you know a little bit about what it looks like to be an extravagant giver. And how many of you are parents? How many of you, upon seeing your mother/father spoil your children, have ever used the phrase “I don’t know who your grandmother/grandfather is, but that is not the man/woman who raised me…”

“Ask, and it will be given you; search, and you will find; knock, and the door will be opened for you. For everyone who asks receives, and everyone who searches finds, and for everyone who knocks, the door will be opened. Is there anyone among you who, if your child asks for bread, will give a stone? Or if the child asks for a fish, will give a snake? If you then, who are evil, know how to give good gifts to your children, how much more will your Father in heaven give good things to those who ask him! (Matthew 7:7–11 NRSV)

Joshua started out as a military leader serving under Moses and won a battle against Amalek (Exodus 17:8-16). He continued to serve Moses in greater and greater roles. This is evidenced in Scripture:

The Lord said to Moses, “Come up to me on the mountain, and wait there; and I will give you the tablets of stone, with the law and the commandment, which I have written for their instruction.” So Moses set out with his assistant Joshua, and Moses went up into the mountain of God. To the elders he had said, “Wait here for us, until we come to you again; for Aaron and Hur are with you; whoever has a dispute may go to them.” (Exodus 24:12–14 NRSV)

Joshua was with Moses and he was in the tent! He began to stand up with confidence and courage and UNRESERVEDLY FOLLOW THE LORD!

Why did Joshua have this courage to unreservedly follow the lord? Because he spent so much time in the PRESENCE of the Lord. He was “Coram Deo,” which means in the presence of God.

Faithfulness and leadership go hand in hand. If you are faithful, God will give you opportunities for leadership. Even when you don’t think you are qualified. It is God’s presence alone that makes us qualified for leadership.

You cannot be a Joshua kind of leader if you spend time with God once a week or even once a day. You must be aware of the presence of God with you everywhere you go every minute of the day! That’s when you will have the courage to stand up for the Lord with courage!

Your godly leadership is directly connected to your faithfulness to Him. And remember, He is an extravagant Giver!

I met with a friend a week or so ago who is a Joshua kind of leader. He is responsible for hundreds of people in his workplace, and some time ago began implementing certain godly principles into his workplace environment. Because of his faithfulness, he has completely changed the atmosphere of his workplace.

My friend’s story is evidence that if you step out, God will meet you and take you on a greater adventure than you could ever imagine.

I have my own evidence of faithfulness that leads to great adventure and opportunity. My faithfulness over the last few years has developed my leadership and has led to God giving me the opportunity to lead a new model of discipleship called Abide. My new ministry will officially launch July 1 serving the Alabama-West Florida Conference of the United Methodist Church.

Abide has been in the making for almost three years. Here’s the back story: On July 1, 2018 I was appointed as an Associate Pastor here at Lynn Haven UMC to serve as the campus pastor at what was then known as the Fusion campus. Just over three months after starting in my new role, Hurricane Michael destroyed the Fusion campus as well as the main campus of Lynn Haven UMC (and most of Bay County). Though at first I mourned the loss of the building where I had been appointed to serve, through prayer and significant moments of fellowship and service with my church family I soon saw God powerfully at work in what was happening.

A few months later I was asked to lead the formation of a Hurricane Michael Recovery Team for the Conference and I witnessed God’s faithfulness to provide in every way to equip my new team! Since January 2019 the team has helped 250 households recover from the storm. Through amazing partnerships that only God could have orchestrated, the team built 41 houses from the ground up and repaired more than 150 homes that were severely damaged or destroyed in the storm. Along the way we shared the love of Jesus with 250 families!

My faithfulness in God and awareness of His constant presence led me to hear from Him as He prompted me to propose a new model of discipleship to the Conference. The model of Abide is to do church every day through disaster response, socially responsible housing and entrepreneurial business development. More details will be coming soon as we officially get going in July.

Bottom line: God is so faithful when we are willing to step out and be faithful to him. If you want to be a godly leader, then you must be faithfully “Coram Deo” — in the presence of God.